Gold investing is a field with many options. You can gain exposure to the price performance of this commodity directly by purchasing physical quantities of it in various forms. You can also make profitable ventures into gold through the purchase of stocks and other financial instruments.

The most traditional way to invest in gold is to buy it straightforwardly. You can acquire quantities of gold as coins, bars, and some other forms.

Many people prefer this method because it allows them to hold their investment in their hands and they derive satisfaction from that. If you put physical gold in a retirement account, then you may be delayed in holding it yourself because a special, third party will have to keep the gold for you until you officially retire.

Nevertheless, a lot of investors are driven to this type of investment because they lose confidence in their more abstract investments in stocks and bonds that seem to exist only on paper.

Physical investments typically occur in the form of coins or bars. Other types of physical investment resemble these first two. For example, there are rounds and proofs, which look like coins but are not usually counted among the legal tender of a country as gold coins are. You can also buy collectible coins or coins salvaged from shipwrecks. These are also gold investments but they naturally incorporate other values in their purchases as well.

Several different countries mint gold coins annually. You will have a hard time finding many from certain periods in the 20th century, such as the 1970s. Many nations abandoned the gold standard and stopped issuing gold coins.

South Africa, with the infamous Krugerrand, was one of the few exceptions. In the late 1970s and early 1980s, many countries began issuing gold coins again. Examples include the American Gold Eagle and the Chinese Gold Panda.

Most of the examples contained here are considered legal tender for use in business transactions occurring within the borders of the country which manages each mint. However, given that the value of gold is so high, it would not make sense to use the coins in that fashion. For example, most one-ounce gold coins are given face values of anywhere from 10 to 50 units of their currency but the actual value of a gold ounce is more than 1,000 units of most such currencies.

The US Mint strikes more gold Eagles every year. These coins are given a face value of $50 and show a bald eagle on one face. These US coins are almost unique among gold currencies in the world because the mint purposely mixes small amounts of silver and copper into the alloy.

This gives the strength of the coin and helps them resist the wear that brings down the value of many other coins. The American Gold Eagle sells well above the spot price because of these factors.

The Chinese got into the gold mining business in the 1980s. Their gold panda is known for its purity. These coins also change design periodically, giving each batch a boost of numismatic value.

The Canadians are known for the high level of purity in their coins. Each gold maple leaf coin is rated with a .9999 fineness. This essentially means that they are 100% pure, as there is no higher fineness rating. 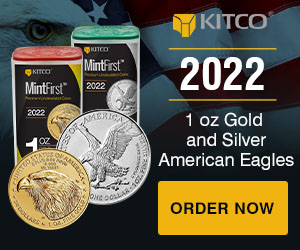